When Four Minutes is Enough

In today’s fitness world we seem to have a plethora ofoptions. Recently circuit training has come back into the main stream largely due to, in my opinion, the popularity of CrossFit (see my previous article formy take on CrossFit). But out of this resurgence has come a variety of choices from the all-out never ending WOD, to your various High Intensity IntervalTraining (HIIT) classes offered at many gyms across the country to this weird class called Tabata. No, Tabata is not the newest craze dance class like the name may imply. Even though the classes in your local gym may be somewhat new, the Tabata workout was actually created in 1996 by a Japanese physician andresearcher by the name of Dr. Izumi Tabata as a way to increase the maximum volume of oxygen (VO2 max) for Japan’s top speed skaters.

I know you are all saying “Well that’s neat. Why do I care?”  Well because your local gym, and the one I work at are doing it wrong! You see Dr. Tabata’s initial protocol and workout called for only 4 minutes. It’s hard to sell a class for only 4 minutes of work. So the fitness industry took Dr.Tabata’s idea, watered it down some and poof a workout for the masses. Now I am not saying the class at your local gym isn’t any good,  anything that doesn’t pose an elevated risk of injury and can get you up and moving is good. However, my OCD doesn’t like mutant forms of anything, much less a mutated workout (except for X-men and Ninja Turtles those are cool mutants). 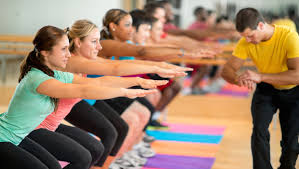 So what does the “real” Tabata look like, well it is similar to your class in that it is 20 seconds of work with 10 seconds of rest, however, the kicker is in the intensity. In your class I am assuming the instructor istelling everyone to push hard and really work. But knowing everyone still has another 20 minutes of class left psychologically you are going to leave some fuel in the tank for the rest of the class. In Dr. Tabata's study he found that if the athlete works at 170% of their VO2 max for 20 seconds then rests for 10 seconds after only 8 rounds (4 minutes), this will illicit an increase in VO2 max. Like any workout this is not a one and done fix, Dr. Tabata’s study took place over 6 weeks having the participants perform the exercise multiple times per week. So if the 170% of VO2 maxmight as well be a foreign language to you here is an easier way to figure theintensity. Take 220-your age to find your maximum heart rate (roughly) this is not as fast as your heart can beat it is just a rough estimate that it is asfast as your heart will/should beat during strenuous activity. Now take 120% of that number.  Using myself as an example 220-31=189x120%= 226 is the heartrate I need to achieve. Now most people will say that is very high, which it is…that’s the point. That is also why this workout is only 4 minutes long. That level of intensity is near impossible to draw out for an extended period of time. In the simplest way to explain it, this workout forces your body to work harder and faster than it is able to pump oxygen through your body. So even though you are breathing you are still not getting oxygen to your muscles, thus forcing your body to adapt. The Tabata workout should be made of up primarily total body multi-joint movements, here is an example that I gave to one of myathletes: Sandbag squats, dumb bell cleans, mountain climbers, push-ups,burpees, jump squat, jump lunge, squats. Notice the progression from legs to arms incorporating the entire body then going back to legs, these are all big multi-joint movements with elements of speed and explosion that tax the system much greater than other exercise choices.

Now I understand that to Jane and John gym member this may be alittle intense. This is true, as I stated in the beginning, this work out was designed for top level international caliber athletes. As a trainer I havebegun to implement this on a couple of my clients. Both of which are endurance athletes, whom are accustomed to longer duration workouts.  So when they saw a4-minute workout there was some initial kickback, which only makes sense.  However, after they were not asking me to extend any form of the workout. 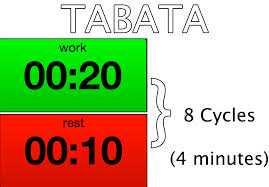 For the everyday person intense intervals have been shown to have a longer lasting effect on fat burning post workout and encourage the body to retain muscle as opposed to longer duration steady state cardio which can cause the body to use muscle as fuel. So for the gym goer looking to lose fat while keeping that oh so important fat burning muscle, I recommend inserting some type of interval into your cardio regimen. For the athlete, intervals are paramount to keeping your body a well-rounded machine tobe ready for everything tha is asked of it during your sport. Finally, for the OCRathlete I feel as if this can be a very useful tool to help get you over whatever hump or plateau you may be facing.  The intense nature of this workout with laughable time to rest between sets forces you to push beyond what you thought was possible. So please when you see the short 4-minute workout, be weary, because it may be the best/worst 4-minute workout you have done.

Jared has a B.S. in Fitness & Wellness, as well as acertified personal trainer. As a college athlete he played soccer as well asran track. In recent years Jared has started competing in OCR events and hasbecome one of the strongest members of Team Strength&Speed and qualifiedfor and will be competing in the 30-34 age group for the 2016 OCR WorldChampionships.