Idecided to pick up Phil Knight’s book ShoeDog, about the founding and history of one of Nike.  Today, Nike is viewed as a giant in the shoeand athletic clothing industry.  However,they were not always like this.  Afterreading this book, it gave me a whole new perspective on Nike and how difficultit can be to start a business.

ShoeDog takes a look at Nike focusing on the early days and follows through all theway up to modern day.  The later years ofthe story are mostly glossed over, but the early years are very in depth.  Hearing how they struggled to make ends meet,took large risks and were almost sued out of existence in their early daysreally gives you a new view of the company. Their persistence and innovation revolutionized the running industrydespite several points in the story where their existence seemed like it wasdestined to fail.

Thebook is also filled with a ton of stories that are just interesting to hearincluding stories about the legend Steve Prefontaine, how Nike came up withtheir name and Bill Bowerman’s historic waffle design on the bottom of Nike’sshoes.  While Nike is sometimescriticized today because they are often viewed as “the man” or “a superpower”when it comes to the athletic world, just like every other company they startedout very small (as Blue Ribbon Sports).

Ireally enjoyed hearing the backstory associated with Nike.  While obviously written from a biasedperspective (owner Phil Knight is the author), in my opinion he still sharedsome stories that does not paint Nike in the best light.  However, he explained his side of the storyand how he saw the situation at the time. If you are a fan of Nike, a fan of running or just someone who likes toread about the backside of the athletic industry, this would be a good book toadd to your reading list. 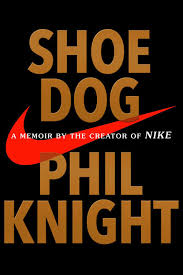