Why you should dress like a A**hole in the gym

I typically roll into the gym with a sleeveless shirt, shorts, a hat, headphones in my ears and carrying my gym bag with random accessories. While I think I sport a good enough physique today that warrants a sleeveless shirt, 8 years ago (maybe less), I did not. However, I still encourage dressing the way you want when you go to the gym, because it is your time to work out and who cares what other people think.

There is a term called the Observer Effect or the Hawthorne Effect. The quick explanation is that when subjects are being watched and they know it, it influences their behavior. The name stems from observers watching workers in Hawthorne Works, a factory in Illinois, and adjusting the lighting conditions to figure out if which provided the maximum level of productivity. Despite lowering lighting, productivity improved, but they ultimately concluded it was a result of being watched and had nothing to do with the lighting.

If you want to wear a sleeveless shirt eve if your small tank top looks like it is two sizes two big, I say go for it! Everyone has to start somewhere, the fact that you are in the gym working to improve yourself says something. If you are familiar with the story of Arnold Schwarzenegger working on lagging calves, this falls into the same concept. The brief synopsis is Arnold felt his calves were lagging so cut off his sweatpants so his calves were always exposed. This ensured he always worked on his weakness.

This observer effect can be used to your benefit in the gym. If I know people are watching me in the gym I subconsciously try harder. You may have noticed this effect if you have ever asked a friend to video tape you during a lift. While you do not have to dress like an asshole, dress how you want when you head to the gym and if other people stare, than it will probably only help you out. The same effect can be seen when males are lifting around attractive females (see “The Yoga Pants Efect”;). 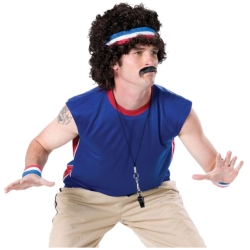