Martial arts training in the military has evolved several times over the years. One of the most iconic knives from the military appeared in World War II, the Sykes-Fairburn knife. Usually sold as an all-black dagger, the outline is identifiable easily to anyone that likes knives. The knife was named after two men, one of them being British Lt Col William Ewart Fairburn, who made a knife fighting training video. Thanks to YouTube and someone uploading an old copy in Greek, you can now watch it.

Here’s a quick review of some of the more interesting takeaways from the 13 minute short training film.

1. Early Understanding of Relevance: The film is short and Fairburn understands his audience emphasizing that he’s not here to make you an expert just give you a small base of knowledge to get you out of jam. The same concept carries over to the Modern Army Combatives Course. The current Army’s combatives isn’t designed to make you a black belt or even a Brazilian Jiu Jitsu blue belt…it’s designed to teach you some basics to help get you out of a bad situation if required.

2. Relevance to Mixed Martial Arts (MMA): In the film he goes through a portion where he says things like “don’t wrestle a wrestler” and “don’t box a boxer”. Even today we see MMA fighters enter the ring and try to compete at their opponent’s specialty instead of forcing their opponent to fight their specialty. Was this revolutionary when the film was made? Maybe…either way it is a good reminder. 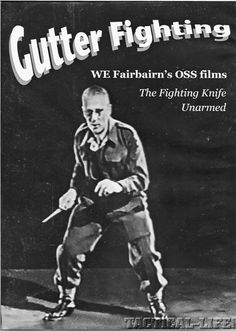 3. Use of Self-Defense Solid Techniques: The film shows some brief techniques that are still applicable and useful in self-defense today including aiming for the eyes or throat with your fingers. He also recommended the palm strike, a great tool that will virtually eliminate the change of you breaking a finger on someone’s skull unlike a closed fist. He also recommends the hands up/surprised/don’t hurt me stance, a common piece of advice for modern self-defense because this position is actually a ready position for striking and much better than your hands at your side.

It’s an interesting watch if you haven’t seen it. The film is not perfect and seeing some of the really dated stuff was funny like his tie tucked into his pants. It was also funny to hear him say things like “kicking is okay” the implication being that back in WW II, kicking someone was considered dirty or improper for fighting, a notion that is long gone. The only parts I disliked were some dubious claims about the effectiveness of his chop (i.e. will knock him out for 2-4 hours, a chop will break an arm and a throat chop will kill him). Based off what you can see on professional MMA every weekend, we know this is not the case even by trained athletes.

For a video that’s about 70 years old on fighting in the striking weapon range, it remains surprisingly relevant today. Head over and check out Fairburn’s video here: www.youtube.com/watch?v=65oVqhF773Y